My 9-year-old son and 8-year-old daughter go to the local elementary school on weekdays and they also go to Japanese school every Saturday.

They are busy, but they enjoy both.

My son is not shy, he wants to speak in English and has made a lot of friends in school.

My daughter is shy and not good at speaking.

She had a very hard time at the local school in her first week.
(I will write about this later, it's a long story.)

But she has been getting used to being there little by little and could make good friends there.


They started learning English in January from online Japanese teachers.

The teachers were amazing and very kind to my children.

My son seemed to be good at remembering language, he learned very quickly.

But my daughter didn't.

She enjoyed the English lesson, she liked her teacher, but she forgot what she learned easily.

Actually, she didn't even know ABC's.

I think she tried her best.

But she needed more courage to speak in English.


When we moved to the US, it was during the summer vacation.

Even though I took them to the park, supermarket, museum, and so on, my children didn't have any opportunity to speak in English because I had to speak instead of them.

For example, I let them buy something at a food stand.

"Say 'one hot dog and one French fry, please' to the staff."

My son tried to say it to the staff, but the staff couldn't understand him because his pronunciation was not good.

My daughter tried to say it to the staff, but the staff couldn't understand her because she was shy and her voice was too quiet.

In this case, the staff asked me with troubled face what we wanted to order.


I thought that was too difficult for them, so I suggested to them:

"Why don't you try to say hello to people who pass on the street?"

I thought it would be an easy thing for them to try.

Actually, we don't have such a custom in Japan.

If people we do not know say hello to us in Japan, most of us would be surprised and think:

Of course, NOT all Japanese people have this reaction.

But here in the US, people tend to be more social and say hi more often than the Japanese.


They named this  the "Hello Project" and started trying to say hello to the people who met on the street, near our house, at the park, and so on.

The reactions from the people who were said hello to by the children were very interesting.

Some of them seemed to be surprised at first, then smiled and said hi to them.

Some of them didn't say anything.

My children were disappointed to see such a reaction, but I explained this to my children like this:

"There are various kinds of people. Some people say hello, but some don't. That's same in Japan, too. You don't have to be disappointed even if they don't react to you."

One day, they said hello to a young man who was walking near the supermarket.

My children took some time to understand what they said.

A while after we passed the man, my son finally said "I'm good, thank you. And you?".

But he already had gone far from us by that time, but he said to them in a loud voice:

We were very glad to see his reaction.

This event encouraged my children very much.


I think language learners need courage when we try to speak in foreign languages for the first time.

But when we find that they can understand what we say, we feel very happy and it encourages us a lot.

I wanted my children to experience a small success and a sense of grafual achievement little by little.

I believe that little improvement will build up and they will become confident.

And the same goes for me.

After I moved to the US, I had to adapt to the new environment.

I sometimes hesitated to try speaking and was disappointed because I couldn't do it well.

I didn't want my children to hear my complaints, but it made me drive into a corner.

When I felt tired and troubled, I shut myself in my house and didn't go out all day.

I called to my mother using my iPad and told her how I had a hard time getting used to my new life.

She listened to my story patiently.

Thanks to her, I was able to feel better.

I believe it's sometimes OK if I want to take a rest.

Little by little, I want my children to enjoy their life, and I also want to enjoy my life in the US. 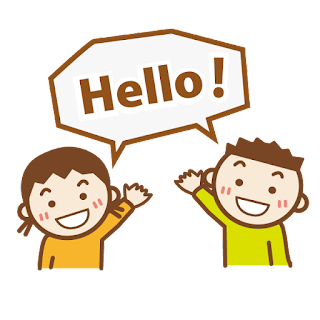 Email ThisBlogThis!Share to TwitterShare to FacebookShare to Pinterest
Lavels: children, English, family, US