My husband and I went to Osaka to watch the musical show called Prince of Broadway.

When I was a college student, I watched it for the first time in Japan.

It was an electrifying experience for me.

I fell in love with its music, songs, and story.

Since I wanted to watch it again, I worked part-time at the sushi shop and saved money then went to watch the musical again.

I have watched the Phantom of the Opera more than 30 times.

I had been to Toronto to watch it.

Of course I like other musicals like Cats, Beauty and the Beast, Les Miserable, West Side Story...

There are too many!

I have been a fan of Ramin Karimloo since I watched the 25th anniversary DVD.

He played the role of Phantom in the DVD and I thought he was the best Phantom I ever watched.

When I knew he was coming to Japan to perform as Phantom in the musical show called Prince of Broadway, I thought I couldn't miss the rare opportunity and if I missed it, I would surely regret it.

My children and I visited my parents house last Saturday and stayed there overnight.

I asked my parents to take care of them and went to Osaka with my husband yesterday.

It was the first time for us to travel any great distance without our children after we had them.

We met up at Nagoya station and took Shinkansen to Osaka.

It was as if we were back before we got married.

The show was incredible, fantastic, amazing, and wonderful!

I could finally watch Ramin's Phantom.

He sang "the Phantom of the Opera" at the end of the act 1.

"My power over you grows stronger yet"

I have never listened to a singer like Ramin who sings "stronger" raised the interval.

But his part was very short, he only sang until "the Phantom of the Opera is there inside your mind."

I screamed in my mind.

But I could get absorbed in listening to his beautiful voice sing by "Music of the night".

But the curtain started being closed while he was singing the very last lyrics, "Help me make a music of the night".

I really wanted to listen to the last echo of his voice but I couldn't hear it because the audience started clapping.

"Oh no! Keep quiet! He is still singing!"

It was one of the directions, but I was really disappointed.


But other performers were also extremely talented and attractive.

I was enchanted by Tony Yazbeck's tap dance.

He was an incredible dancer and singer.

"Don't cry for me Argentina" sung by Mariand Torres was extremely persuasive so I listened to her song attentively.

"So What" sung by Nancy Opel was very impressive.

I haven't seen "Cabaret" before but I really enjoyed watching it.

Anyway everybody was so talented and performed extremely well, I was so impressed.

I can't write all my impressions here.

When I watch a musical show, it is as if I were in a completely different world.

Thanks to Prince of Broadway, I had a really great, memorable time.

On my way to my parents house, my husband and I enjoyed chatting together about our impressions of the show.

We usually don't have much time to talk with each other, so it was really a good opportunity for us.

We were able to have a good time, it was like a dream yesterday. 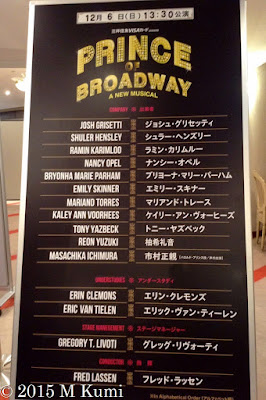 Email ThisBlogThis!Share to TwitterShare to FacebookShare to Pinterest
Lavels: musical