Our first Halloween in the US

This was our first Halloween in the US.

I attended the Halloween party held in the ESL class which I belong to in the morning.

I went to see the Halloween parade held in my children's elementary in the afternoon on Oct 31.

They also had the Halloween party at school.

My children and I went to trick-or-treating with our friends.

My children were so excited!

We walked around our neighborhood for two hours!

I prepared treats for children at home and my husband took care of it.

He called me that they were all gone at 7pm because a lot of children came to our house for trick-or-treating.

I asked him to give them our stock of snack.

It was a very busy day, but we had a lot of fun.

Today I would like to write about how my impression of Halloween changed after I experienced it in the US.

Actually, I didn't have any interest in Halloween when I was in Japan.

I only had an image that Halloween is just a costume parade, young people all gather Shibuya with creepy makeups and they didn't have any rules and manners, sometimes caused the troubles.

I had wanted the Halloween events to end quickly.

I changed my image of Halloween completely changed.

I saw not only children but also adults enjoyed Halloween costumes very much.

The Halloween Parade in the elementary school was so cute!

Children were so excited and walked in the parade proudly.

The teachers were also wearing costumes, those were very interesting!

I was so surprised to see the amazing hospitality of our neighbors.

They decorated their houses and gardens with spider web, skeleton, witches, scarecrows, ghosts, and so on.

Some residents wore costumes and tried to surprise children.

They didn't get mad with children even though they were so excited that they walked on their grass.

They kept the manners well.

Of course, there were the people who didn't join in the event.

There was a sign that they didn't turn off the entrance light and the people didn't ring the bell of those people.

I was able to see that they enjoyed Halloween very much.

I was very impressed to see that the neighbors tried to entertain the people who visited their houses and they also enjoyed themselves very much.

I liked to say "Happy Halloween!".

I thought it was like "Yoi Otoshiwo" in Japanese.

This is a greeting when we ususally say at the end of the year, it means that I hope you will have a happy new year.

I thought a lot of Japanese people misunderstand Halloween.

I realized that it is not only an event for young strange people.

But I was also impressed that my children's school prepared another option for children who didn't want to join in the Halloween events.

In Japan, it's normal for students to join in the school events.

Japanese people tend to avoid doing different things from others. 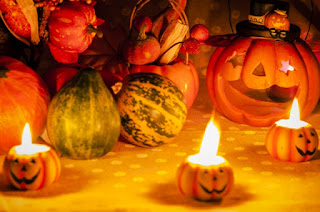