When I took my 6-year-old daughter to the nursery school in the morning two days ago, she told me on our way there:

"Mom, look at that! A pigeon is dead there!"

I looked at the place where she pointed at, there was a dead pigeon which was overturned on the side of the road in front of our neighbor's house.

It didn't have any visible injuries.

"It might have died because it was too hot."

When I picked her up at the nursery school in the evening on the same day, the pigeon was still there.

Ants were around it.

Since I didn't want my daughter to see it, I told her not to look at it when we passed by it.

I hoped that the neighbor would have noticed the dead pigeon and remove it.

But it was not in the grounds of their house, it was on the road.

So I thought it wasn't the neighbor's duty, but it was the duty of all people who live near there.

But I didn't want to get involved.

I found it again yesterday's morning.

I felt like the eyes of the pigeon were watching me, so I lit the area out there.

On the evening of the same day, I saw the eye of the pigeon was pierced by a small twig.

How could someone do such a cruel thing?

I felt indignant to see it and I didn't want my children to see it.

I wondered what I can do in such a situation.

I asked my husband:

"Are you able to remove it if you find an animal is dead on the road?"

"No, I don't want to do it. But one of my colleagues sometimes removes dead animals which he finds, because he feels sorry for them."

"He is a glutton for punishment, isn't he? I will make a phone call to the city hall or the public health center and ask whether they can remove it or not."


When I went to the balcony in my house to hang the laundry in the morning, I saw that the neighbor was cleaning the road where the pigeon was dead.

He had a trash bag, so I guessed he put the pigeon in there.

I really thanked him.

I sometimes have to remove the trash which has been blown by the strong winds into our garden.

In such a case, I always think WHY I have to throw them away though they are not our trash.

But, as long as we live in the community, we need to help each other.

Even such as these caused me to realize this. 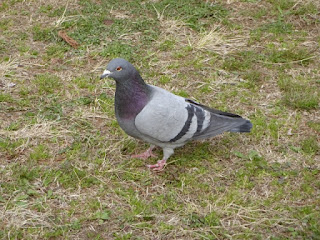