It is not the highest temperature yesterday.

It was my 6-year-old son's body temperature yesterday.

He told me yesterday morning,

" I have a sore throat. I also have a headache."

I touched his head but it was not hot.

I took his temperature but he didn't have a fever.

"Maybe you might feel tired because of the air-conditioner and too hot days recently. But you don't have a fever, so go to the children's house today."

"No! I don't want to go! Please take me to the hospital!"

"But I can't take a day off easily because we work on the shift. If you feel sick, tell your teachers. I will pick you up."

I took him to the children's house then I went to work.


When I was going to have a lunch with my co-workers, the company's phone rang.

It was my son's children's house.

The teacher told me,

"Since he couldn't eat his lunch and he told me that he had a headache, I took his temperature, he had a fever of 38.1 degrees Celsius (100.58 Fahrenheit) now. Could you come and pick him up from now?"

I asked our leader to leave early and went to the children's house to pick him up.


After we came home, it was getting worse and worse.

I took his temprature, his fever was 39.5 Degrees Celcius (103.1 Degrees Fahrenheit)!

I made an appointment with pediatrics.

But he didn't want to go there because he had a severe headache and almost threw up.

I called the hospital and told them that we could not go there by the turn of his reservation.

I kept cooling his head with ice, but he couldn't sleep and looked in pain.

After an hour, I took him to the hospital.

He cried and said,

But his temperature was higher than that.

He was too heavy for me but I had to carry him.

"His throat is swollen. It's probably summer cold."

After we came home, I gave him antipyretics.

Then he could go to sleep at last.

While he was sleeping, I went to the nursery school to pick up my 4-year-old daughter.

He slept for 2 hours, then he woke up.

Medicine seemed to work, and his temperature had gone down.

Since he didn't want to eat, I made him drink water and take antibiotics which the doctor prescribed  for him.


He woke up before 6am in the early morning today.

He has still a slight fever, but he is fine now.

Maybe he will be able to recover his colds today. 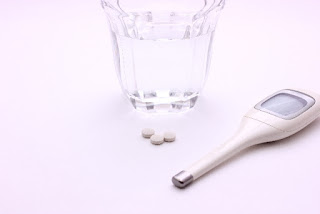