My 5-year-old daughter's fever finally went down yesterday, but my husband still has a fever.

Maybe because he didn't get the flu shot.

Since they needed to rest at home, I accompanied my 7-year-old son's practice of riding a bicycle.

I bought him a book named "Doraemon the latest secret tools encyclopedia" as a prize of winning the Karuta competition held in his class before.

He had wanted it for a long time, so he was glad to have it.

1600 kinds of secret tools are introduced with their pictures in the book, and he enjoys drawing them looking at the book.


When we went out of the bookstore, I told my son:

"Can I stop by the Seven Eleven (convenience store)?"

"Sure. You want doughnuts, right?"

I was impressed that he was able to guess my idea.

"Yes. When we went to the Seven Eleven before, the doughnuts were already sold out. Do you remember it? I have wanted it since then."

We drove to the nearest Seven Eleven.

"What? Oh no! The store has been already closed! When did they go out of business?"

I was really surprised because I didn't notice the store closing even tough I passed in front of the store by car when I went to work.

We decided to go to another Seven Eleven.

"Oh my goodness! This Seven Eleven was also closing-out. Well, can we go to another Seven Eleven again? I DO want the doughnuts!"

I told him, and he said:

He seemed to enjoy this trouble.

We drove to another Seven Eleven again.

We reached there and went into the store.

"Look mom! There are doughnuts!"

"But... the Old Fashion ( a name of the doughnut ) is already sold out. I like it very much. If you are OK, can we go to another Seven Eleven again? After coming this far, I DO want to eat the Old Fashion! I know there is a Seven Eleven which opened recently near here. So let's go there!"

I drove my car about for 5 minutes, then we reached the Seven Eleven.

"I hope we can buy them this time!"

We went into the store.

"Wow! We finally found the Old Fashion! I will take three, please."

We finally bought them!

My son and I were glad together.

After we came home, we told my daughter and husband:

"We bought doughnuts! Let's take a break. But it's already 5pm!"

My children and I enjoyed eating the doughnuts of our wish.

Poor my husband didn't want to eat them as I expected because he still had a feer and couldn't taste. 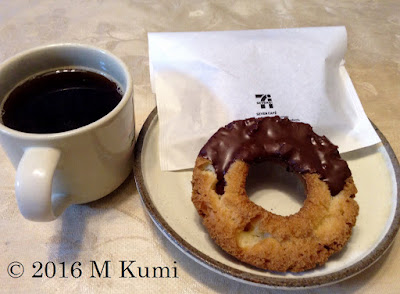