When we were taking a bath, my 6-year-old daughter imitated that Rafiki,which is the name of mandrill in the movie "Lion King",  is meditating.

She told me making circles with her thumbs and index fingers like Rafiki.

"Do you know the name of the act?"

"It is called meditation. When we visited the temple of Nagano during our family trip last month, one of the international students from Tibet explained what is meditation to us. Do you remember?"

She didn't remember about it.

My 7-year-old son who was listening to our conversation said:

"In the movie, the stampede of gnus broke out, then they ran away. didn't they? And we watched Lion King broadcasted on TV the other day!"

I was amazed to hear what he said.

"Delusion" is called 妄想（もうそう）(mousou) in Japanese.

"Stampede" is called  暴走（ぼうそう）(bousou) in Japanese.

"run away" is called 逃走（とうそう）(tousou) in Japanese.

"broadcast" is called 放送（ほうそう）(housou) in Japanese.


He made rhyming sentences by himself!

I was surprised that his vocabularies are increasing.

He likes reading books and comics.

I think maybe it is good for him to have opportunities to encounter new words. 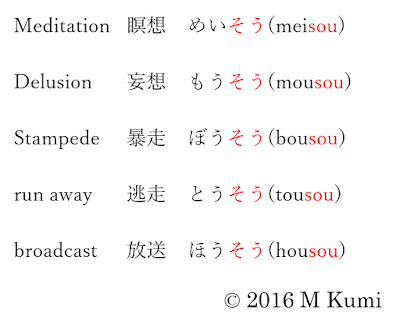