How do you motivate your children?

My children go to the children's music school every Saturday.

In fact, I had been a student of YAMAHA music school more than 30 years and learned playing the Electone.

It was only my hobby and I liked playing the Electone very much.

We bought a new Electone 5 years ago.

My husband and I hoped that my children would want to learn how to play the Electone in the future.

I stopped going to the music school 3 years ago because I started working.

Then my 6-year-old son started going to the children's music school, and my 5-year-old daughter also started 4 months ago.

Basically they need to practise playing the Electone every day.

My daughter likes practising very much, so she is always willing to practise it.

She can play all songs which are in the first music book, so all I have to do is only to look at her practise sometimes.

But it is difficult in my son's case.

He likes music, but he doesn't like practise playing the Electone.

I have always hard time to let him practise it.

It is getting decreasing, but he gets angry with me when he can't play it well.

I also feel frustration but I need to put up with it.

But I sometimes can't bear it, and I also end up getting angry with him.

I really realize that to let children learn something needs patience.

When I told my son to practice the Electone, he said he didn't want to.

I considered what was the best word to let him practice.

"If you practice, I will give you something." → It is meaningless. He is rarely on such kind of suggestions.

"If you don't practice, you must not watch TV." → There is no point in forcing him.

"You are becoming able to gradually play that difficult song well. You could play it with both hands well yesterday, right?  If you practice it today again, you will surely be able to play it better than yesterday. Let's start !"

I waited for him to start practicing by himself.

Finally he started practicing and I looked at him in silence (because he will be in bad mood if I point out his misses too much).

I sometimes play it together with him, for example, he plays melody and I play accompaniment.

He had tried to stop going to the music school three times until now because he didn't want to practice it any more and I couldn't put up with his attitude.

But when I asked him,

"Don't you really regret to stop it?"

"On second thought, I will not stop it."

I think that the thing which whether he can continue on practicing the Electone depend on my patience.

I need to keep calm and praise him to let him practise.

And I hope the day he will really enjoy playing it will come someday. 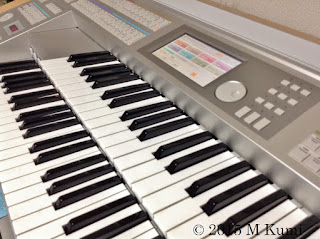