One of our neighbor's family invited us to their home to play with sparklers together yesterday's evening.

Their daughter and her cousin's boy go to the same nursery school with my 5-year-old daughter.

So my children were so excited and they enjoyed sparklers together.

They were scared of fire of sparklers last summer, but they could play them safely yesterday.

After we finished, we went to the Bon Festival dance held in the park near my house.

Bon dance is the dance for holding a memorial service for the dead during the Bon period (8/13~15, but it's sometimes held in the beginning of August).

Everyone from adults to children enjoyed dancing.

But I knew that my children would not join in a large dancing circle.

Just as I expected, my 6-year-old son got absorbed in catching cicadas which were gathering at a strong light with another children.

He took out a cicada which entered the lantern and couldn't get out there.

Then older women who were dancing praised him and told him that he could get it.

Of course he grabed it for a while and he didn't dance.


Since I knew she likes to dance very much, I told my 5-year-old daughter, "Lets dance together!" .

She found her friend and started the game of tag.

After a while, my husband and I took my children and danced together only the last one song.

My children only got a bag of potato chips which the children association of our region gave them.

They said, "It was a fun night!" though they almost didn't dance. 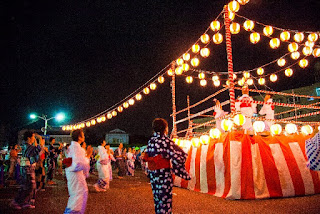