When I went to the children's house to pick my 6-year-old son up yesterday evening, one of the teacher came to me and said,

"I am sorry. He was bitten by his friend today."

Anytime they find children's injuries which are caused by their fight, teachers usually apologize to their parents that they could not stop children's fight before either one injured.

According to her, my son and his friend were going to play a game, but his friend insisted the wrong rule of it.

It was only his misunderstanding.

My son insisted the correct rule, but the friend didn't agree it.

He was going to look for another friend who was likely to agree his opinion, but he wasn't there.

So my son told him,

"It serves you right!"

He lost his temper and bit my son.


My son had only a little bite on his arm.

"So that means he said an unnecessary words, right? I hope he would mellow out a little... "

She made a bitter smile and said,

"But children must not bite someone for whatever reason."


My son seemed that he was not upset for this happening.

In fact, he was bitten by the same boy 3 years ago.

I thought his friend and my son were basically incompatible.

Then we went to the nursery school to pick my 5-year-old daughter up.

She noticed that a tiny ant was carrying food when she was about to prepare to go home.

She was glad and said,

Her friends came to her and they were watching it for a while.

Suddenly, one of her friend stepped the ant and killed by her finger.

My daughter was so surprised and got mad at her.

She started crying and hit her friend's head many times.

"Why?  What a poor ant!  We must not kill any living things, right?"

I couldn't answer to her.

She was crying and would not move there for a while.


When we find ants inside house, we usually kill them.

But it has also a little life and we don't have to kill them outside house.

Her opinion was right.

But I could only agree her feeling.

We sometimes encounter situations which we can do nothing for them.

I can only say that I hope that my children will become strong mentally to get over difficulties. 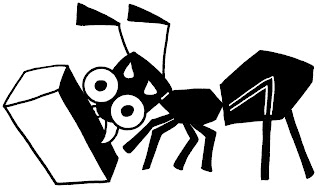