My 6-year-old son's friend came over after school yesterday.

He and my son were in the same class at the nursery school, but they are in different classes in elementary school but they are good friends each other.

Before he came, my son came and hugged me saying,

" I need to be charged before he comes."

In his case, the charging means that hugging me.

It was a little surprise for me because it meant that he feels embarrassed if his friend sees that my son nestles up to me.

I realized that he has been growing mentally, too.


His mother took him to my house after I picked my 5-year-old daughter up from nursery school.

I asked her to pick him up around 5pm.


Since I wanted to watch what they do, I stayed out of their way.

After they ate snacks, they started playing with toys.

But they got tired of that after a while, so my son turned the TV on and started watching anime.

They watched Doraemon together, then his mother came to pick him up.

To be honest,  even though his friend were with him, my son behaved same as usual.

His friend also seemed not to mind and he behaved as he liked.


Looking at those two, I really can see why they say birds with the same  feather flock together

Both of them do things at their own pace, and they are easygoing.

To be absorbed doing their favorite things even when they are around their friends, I could understand why they get along so well. 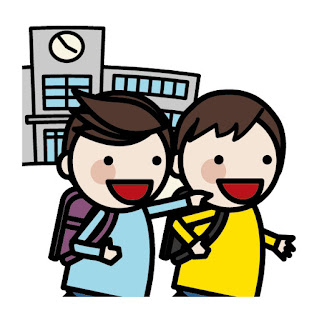