Birds which herald the coming of spring ~Japanese bush warbler~

My children and I visited my parents house yesterday.

After we reached there, my children began to quarrel about what to play.

My 7-year-old Son wanted to play Donjyara (his favorite board game).

My 5-year-old Daughter wanted to play a jump rope.

When they were in bad moods, I heard a Japanese bush warbler sang from the garden.

"Wow! Did you hear it? I heard "Hooo- Hokekyo (ホーホケキョ ; songs of Japanese bush warbler!)". An Uguisu (Japanese busu warbler) may be in the garden. I want to hear it! I am going to go out to the garden!"

I was excited to listen to the song because it reminded me of coming of spring.

My children told me:

We went to the garden.

"Be quiet and listen. Hey! Did you hear it?"


My children forgot that they were quarreling and we drunk in the beautiful songs.

My mother told me:

"When I heard a Japanese bush warbler sang, something good always happened to us so far. For example, you and your sister passed the entrance exam."

"Really? So I hope something good will happen to us from now!"


After all, we started playing a jump rope at the garden listening to the Japanese bush warbler singing.

After that, my mother told my children:

"Let's play softball! Have you ever played it?"

Since she was a member of the soft ball club when she was a student, I also used to play it with her when I was a child.

She told them how to play.

We used a tree branch as a bat.

My mother was a pitcher, and my Son was so excited because he made a hit.

I told him and he pretended to run around the bases.

My Son and Daughter hit the ball in turn.

When my Son's turn, he made a hit.

The accident happened at this time.

He was so glad and threw the bat and ran.

The bat hit my Daughter's face who was watching him.

Unfortunately, she got a bruise on her face and cut inside her mouth a little. 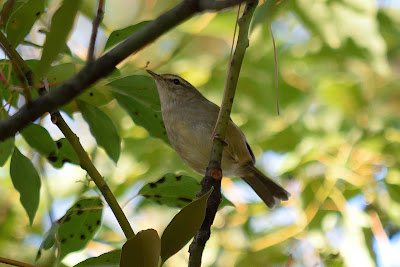