I try not to let them watch TV after dinner weekday because I want them to spend their time for their favorite things like drawing, crafts, playing together, practicing the Electone (electronic organ manufactured by YAMAHA co,ltd) , and so on.

Since they often draw pictures and make something, their works are increasing.

I prepared a box for them to put them away, and I told them to dispose of some of them if the box becomes full.

If they want to keep them, they can.

But I want them to choose a few.

I found their drawings overflowed from the box last night.

"Look at this! It is already full. Sort out the pictures!"

My 7-year-old son always becomes in bad mood and says:

"I don't want such poor drawings!"

If I could keep all of them, I would like to do it.

I don't want tell them to dispose of them.

My son said that he didn't want to throw his works away by himself.

I understand his feeling.

But if I throw their works in secret, they will be sure to get mad at me.

My daughter decided to dispose of two of them after taking photos.

The first one was a girl wearing a blue dress made of Origami. 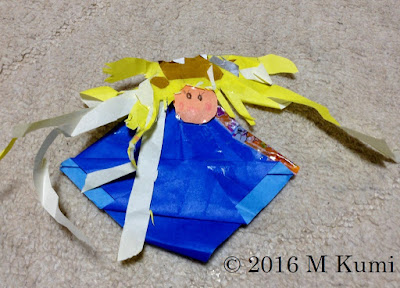 The second one was a ship made of some plastic trays and a toilet paper tube. 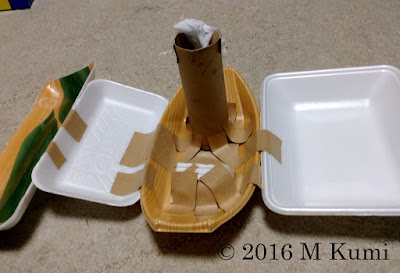 I am always worried about how to let them put their works away.