Translator of their emotions

When we got out of the bath, my children started fighting.

I didn't know the cause of the fight, but I guessed my 7-year-old son spoke ill of my 5-year-old daughter.

It is normal for them so I didn't try to stop their fight.

But my daughter hit him hard.

He got mad at her and said:

But she ignored him and started singing.

Her behavior made him get even more angry.

He was so upset and started crying.

Since he was too excited, I thought I have to calm him down.

I let my daughter go to the living room, and I told him while drying his hair.

"I know how you feel. You didn't like her behavior in which she ignored you, didn't you?"

"I am sorry, in fact, I taught her about it before. It is her secret way how to deal with your bullying. You often speak ill of her when you are in bad mood, don't you? It was not her fault. She is always kind to you, right? When you told me that you felt cold, she brought you a blanket. Anyway, You guys are like my sister and me when we were children. We often fought and I used to tell her "I will never talk to again!". But I forgot about it the next day, and played with her again. That's siblings."

He stopped crying and listened to my story while laughing.

I told him but he said:

"I will go to the living room and write something on my hand."

"What are you going to write on your hand? You have just finished taking a bath."

"I want to write "I will never talk to her" on my hand not to forget about it."

I was really surprised at him, it was not what I wanted him to learn from my story.

"You don't write down such a negative word on your hand! I want to forget about it! Go to bed!"

He started crying and struggling again.

I let him go to the bedroom and let my daughter in to the washroom.

I told her while drying her hair:

"He got mad at you because you didn't listen to him. But you had no choice because I told you how to act. It was not your fault."

Then my son came to the washroom crying bitterly.

"When I tried to take my socks off, I knocked my head against the wall! It hurts!"

"Again? Are you OK? Let me see your head. Is it bleeding? No, OK. Calm down. It surely hurts.But you are OK."

I thought he was sleepy, so I tried to calm him down.

I told my daughter to wait for me here, and took him to the bedroom.

I don't tell my children "It doesn't hurt" in such kinds of situation.

I always try to accept their feelings, so I hugged him and kept telling him to calm him down:

I laid him on the futon and told him to go to sleep.

I went back to my daughter and told her:

"He is going to sleep. Maybe you don't notice why he always gets mad at you. So I am going to tell you why. He doesn't like that you talk to him like I do. I know you are very kind to him. But you sometimes try to take care of him too much. For example, you told him "Do your homework first!" before. You don't have to say like that. You regard him as a good friend, right? But he doesn't. As far as he is concerned, you are his younger sister. He always tries to behave as your brother even though you and he are only one year and 5 months differences in age. That's why he doesn't want you to say things like that. He thinks you are making fun of him even though you don't mean to do it."

While listening to my story, she started crying.

"You don't have to cry. It wasn't your fault. But if you think it is good for him, it sometimes makes him get angry. You just need to try not to push his button.  Do you understand? Maybe it is a little difficult for you to understand.."

I thought she was too young to understand his feelings.

I tried to calm her down and went to bed together.

It was really hard to settle their fight down, I need to be their mediator and explain their feelings to each other.

I don't know if it succeeded this time, but I try to keep up my efforts from now on. 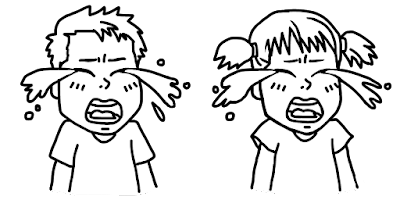