I try to believe

My 7-year-old son promised his friend to play at the park near my house after school.

He was looking forward to it very much.

"Can I bring this snack? I want to eat it with him. He will bring some snack,too. So we will be able to share them each other!"

Then I got an email.

It was from his mother.

"My son told me that he promised your son to go to the park today, but I am afraid that I can't let him go because he was throwing stones when they were playing at the park yesterday. It was dangerous, so I scolded him strictly and I forbid him from going to the park for a while. I am sorry. Please say hello to your son and play with him next time."

Since I went to work and my husband stayed at home yesterday, my son didn't have to go to the children's house and he went to the park with the boy yesterday, too.

But I didn't know about it at all because my son didn't tell me about it.

I asked my son:

"Oh, his mother said that he can't go to the park because he threw stones and she got angry with him. Did such a thing happen really yesterday?"

"Yeah, he was throwing stones toward a vending machine across the street while his mother picked his younger brother up from the nursery school. She came to the park. and found him throwing stones, then  scolded him."

"How about you? What were you doing?"

"I was climbing up the tree."

Since he likes climbing up a tree, I belived what he said.

I replied her and said:

"You must be disappointed, but I guess maybe you will be able to play with him next Wednesday."

After that, I started suspecting him a little whether he also threw stones with his friend.
Children tend to avoid talking about what they might be scolded by their parents.

But I decided to try to believe him.

After I picked my 6-year-old daughter up from the nursery school, I told them:

"It's snack time! I bought Sansyoku Dango! Since it will be a Girl's Festival tomorrow, many Japanese sweets were sold at the supermarket."

We enjoyed the snack time. 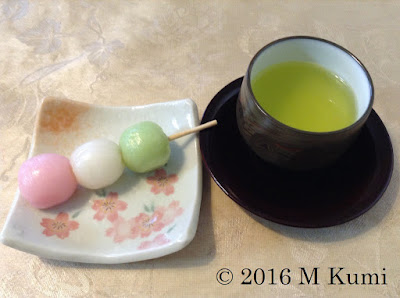