My 7-year-old son participated in a Karate tournament match yesterday.

Since it was his first time taking part in a real Karate match, I was more nervous than him.

Participants in his weight class consisted of only six boys and a girl, so his teacher told him that he would be able to get a medal if he wins once.

Before his match, we watched another boy and girl's match.

It was also the first time for me to watch a Karate match.

I was surprised that the children punched and kicked their opponents seriously because they usually punch and kick lightly when they practice, and they looked to be in pain when they were kicked and punched even though they wore headgear, shin guards, fist guards, and mouthpiece.

I worried whether he would be able to cope with such a match.

But he won the first match.

He fought bravely, he looked like a little martial art fighter.


His opponent in the next match was a 9-year-old girl with a green belt.

He fought against her bravely, but he was kicked and punched many times.

At the end of the match, he looked tired and he couldn't punch and kick any more.

He was kicked mercilessly, and he lost the match.

But he was brave.

He didn't run away from her, and he tried to fight back.

I thought he must have been in painful when he was kicked, but he put up with it.

If I were him, I would not be able to fight because of fear.


Consequently, he won the third prize.

He got a bronze medal and a honorable certificate.

He was glad to get them.

I hope this experience will give him confidence.

He told me that he is reserved in elementary school, and he wanted to become strong.

It doesn't mean that I want him to win the fight against his friends.

If he has confidence to himself, he will be able to feel that it is one of his good characteristics that he is reserved.


When we went to bed, he suddenly started crying.

He seemed to remember his lost match.

"You must have been in pain, but you were brave.  Go to sleep."

He went to sleep soon.

I was really impressed with him.

He is only 7 years old, but he was enough brave. 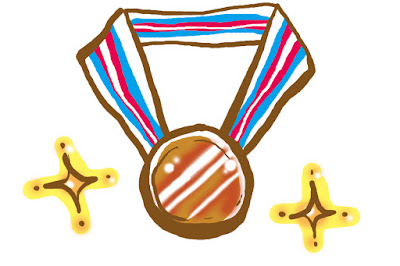