Since there were a lot of leftover rice, I made fried rice for dinner yesterday.

I cut cabbage, carrot, green pepper, onion, pork, shimeji(mushroom), and sausages, then stir-fried them with a little salt and pepper.

Then I stir-fried rice and egg with chicken stock powder, add the meat and vegetables, mixed them, and stir-fried them again.

While having dinner, my 7-year-old son told me:

"Today's fried rice is something different from the usual. I think it is harder."

I thought he was right because I used the leftover rice and I knew he didn't like it.

He stopped eating it and lay on the sofa.

But I told him:

"But I made it as always do. I don't think this fried rice is harder than usual, and the taste is not different, right? I know you don't like hard food, but this is the cause of your weak chewing power as you were told by the dentist. I want you to eat it even if it is a little hard for you."

My 5-year-old daughter who was listening to me told him:

"Your chewing power will be weak if you don't eat it!"

He got mad at her on hearing her words and said:

"What did you say? Huh? Don't make fun of me! That's why I dislike you! Hey, are you listening to me?"

She ignored him completely and told me:

He was enraged to hear that and told me:

"Mom! She isn't listening to me! I dislike her!"

She still kept smiling to me.

He was speaking ill of her for a while.

I thought it was about time to stop their quarrel.

First, I asked him:

"Hey! Wait a mintue. Why are you so getting angry with her? I really don't understand why. Tell me why."

"Because she didn't listen to my story. She always makes fun of me!"

"What did she say? Why do you think she makes fun of you?"

"She told me that my chewing power is weak. I don't want her to talk about it! She always makes fun of me. For example, she has never put toys away, I always put them away alone. But she always behaves as if she put all of them away!"

They had taken an exam checking their chewing power at the event booth of a dentist at the summer festival, and she was stronger than him.

Maybe he remembered about it.

And I know my son doesn't like that she is skilled at shirking her responsibilities and getting him to do them.

I told my daughter:

"Why is your brother getting angry with you? He was shouting at you but you wouldn't listen to him. And he didn't want you to say about his chewing power. It was an unnecessary for him to say waht he did. You know he is always a good brother, he always helps you.  Listen to what he is saying. He is serious. Do you understand his feeling?"

I know why she ignored him.

She just followed my advice which I told her before.

Because my son often speaks ill of her when he is in bad mood, and she always cries on hearing what he said.

"It's not your fault. He is only feeling under the weather, so he doesn't dislike you. You don't have to listen to what he says when he is in bad mood. You need to be patient."

Actually, she is more patient than him.

She apologized to him, but he was still mad at her.

I also told my son:

His mood semed to change on hearing,  they started playing together after dinner.

It is a slightly hard task, but I think it is one of the important parts of parents' duty. 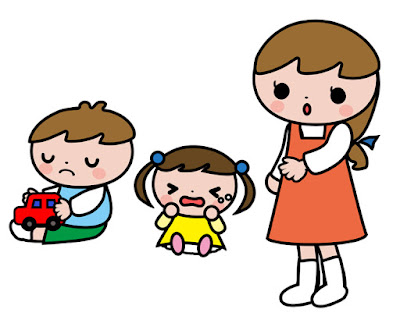