Study in the morning

My 7-year-old son's elementary school teacher called my office again yesterday afternoon to ask me to pick him up because he had a fever again.

I suspected whether he really had a fever.

When I got to his class, he was talking with his classmate with a smile.

I thought the fever of 37.6 degrees was not so serious for children.

As for my son, when he has a cold, his temperature usually goes up more than 38 degrees.

As I expected, his fever fell down to 37.3 degrees.

Just to be on the safe side, I took him to see a doctor.

But the doctor said:

"There is nothing wrong with him. He doesn't have to take any medicines."

Actually, he was running around at the ground of the nursery school when we went there to pick my 6-year-old daughter up.

"It was not a real sickness. If you had a cold and fever truly, you could not smile with your classmates, you would look worn out! You might want to come home earlier than other students. If you do it again, I will not be able to believe what you say. The Sickness is quite different from the feeling which you don't want to do something. Never, never do it again! "

Maybe my son was tired.

Recently, the rainy season has begun around here.

My son's teacher said that five children had a fever at school and went home early yesterday.

As for me, I feel tired recently due to the climate, so I thought I should sleep enough.


I woke up at 5am, one hour longer than usual this morning.

She started writing letters to her friends, and he wanted to play with my iPad.

I allowed him to use it, he started playing an application.

It was an educational app which children can study math.

There are some categories of the questions of calculation in the app.

Each category has 10 questions.

If players can answer the questions correctly, they can get the character of the app.

He likes it very much and he wants to get the characters more.

Now he is struggling with the questions of the volume of liquid because he has not learned it at school yet.

He often asks how to solve such kind of questions to me.

He asked me again this morning:

"Mom, I don't understand what it means." 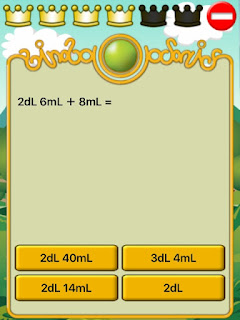 "Well, you need to write down the calculation on the paper, so that you can understand it better."

I prepared a piece of paper.

"Do you remember what milliliter equals to 1dL?"

Actually, I completely forgot about "dL", so I searched it on the internet.

I explained how to solve the question.

He answered the question and it was correct.

He was glad to be able to solve it.

I can manage to answer his question now.

But from now on, his question will be more difficult, so I will not be able to answer his questions.

Parents also need to study with your children, not only force them to study, so that I believe study will become more interesting for children.