My husband took a day off to take a medical checkup yesterday.

I told my 5-year-old daughter about it, she told me:

"So I want to go to my brother's Karate practise with Dad today!"

"You should ask him whether he will go."

After a while, she said:

I thought he didn't want to go, so I asked him:

"Are you going to go with us?"

My son said to his dad:

But he looked glad.


We always take my son to the karate practise and go shopping, then come back to the practise hall about 15 minutes before the practise ends, so that we can see Kumite practise which is a simulation of real fighting.

When we came back, they were practising Kata practise.

Kata is a sequence of basic movements which represent various defensive and offensive movements.
Then they started practising Kumite.

My son's opponent was his teacher.

He fought aggressively, but he couldn't do the basic movement and moved too actively, he was often taken his tail by the teacher.

Since my husband did Judo when he was a student, he was interested in his son's fight.

"He did very well, but he left himself wide open for an attack."

In my point of view as his mother, he did very well.

But his point of view as his father was quite a different from mine.

It was really interesting for me.


After the practise, the teacher told my son:

"Your Kumite was really good. Fantastic! You should practise the basic movements harder, or you will surely be strong. When practising Kata, you were thinking another things like "what am I doing after the practise" or "I want to watch TV". Keep up the good work!"

He looked glad to hear what he said.


After we came home, my husband started teaching his son where to correct his movements.

Then they practised a while again together.

I thought that it is good for my son that his father goes to his Karate practise.

He will be able to give him some advise.

By the way, speaking of my 5-year-old daughter, she is not interested in Karate at all.

She never watches her brother's practise.

She was clinging to her father during his practise.

I don't know why she likes to go to his Karate practise. 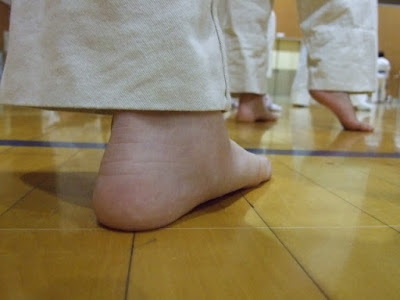