The citizen's festival was held in our city yesterday.

My family went to one of the venues, and children could get a flying balloon at one of the booth for free.

Naturally my children were so glad to get a balloon, so they tried to get more.

Especially my 6-year-old son, he was so excited to have them, that he went to the booth to get more balloons many times.

They gave him balloons though he had already many.

"Don't get balloons any more! Maybe I will have to keep them while you are playing in another booth. I don't want to carry too much balloons! I will be ashamed of it, People will think I got too much balloons when they see me!"

But he didn't stop.

Finally, they got 10 balloons combined!

After that, we went to the booth where we could experience wearing a handmade armor of Sengoku period (from 1467 to 1603 in Japan).

My son was so excited to wear the armor, and he tried to strike cool poses.

While he was playing, I had to carry a lot of balloons as I expected.

Then we walked to the another venue (a park), we stayed there while my children were absorbed in playing.

When I was holding balloons, three little girls came to me with cute smile and asked me,

I thought they assumed that I was a balloon seller.

I asked my son,

"Can I gave them this balloon?"

He looked unwilling, but said "OK".

But their thread had got tangled and I couldn't disentangle them.

"I am sorry but I am not a balloon seller. Furthermore, I can't disentangle these threads. If you go to the venue, you will be able to get the balloon."

They ran to the venue in hurry.


While I was at the park, I was asked where I got the balloons or whether I could give them a balloon by adults and children more than 10 times!

It bothered me a lot, so I asked my husband to carry them, he refused it.

We move to another venue again, and we bought Bingo cards to join in the Bingo game.

After I bought four card for my family, my 5-year-old daughter told me,

"I want to eat a croquette!"

I bought two croquettes for my children at the booth, and I tried to put the change into my wallet.

Then I had let go of the threads of balloon by mistake!

Ten balloons flied higher and higher to the blue sky.

"Oh! These are my balloons!"

But it was too late.

They looked like a tiny dot in the big sky.

My children were so disappointed and got angry with me.

"I am sorry, but I couldn' do anything because I had too many things in my hands."

I knew it was an excuse.

In fact, I was relieved that I didn't have to carry ten balloons any more.

As for my children, they got back in a good mood because they won the Bingo and got snack bags! 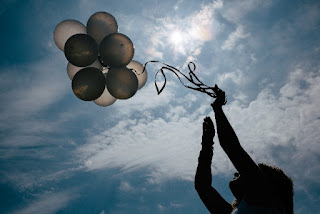