If they had a younger brother

We went to the park near my house yesterday's afternoon.

Actually I didn't want to go because we went out all day last Sunday.

But my 6-year-old son told me,

"I want to climb up somewhere. Oh, the park is the best. There is a climbing equipment. Let's go!"

My children are still young, so it is sometimes hard for me to play with them.

Maybe it was in the successive holidays in Japan, it was very quiet around my house.

But when we arrived at the park, a little boy and his father were there.

I guessed he might be two or three years old.

He noticed that my children were playing, he came and seemed to join them.

He started imitating my son and daughter.

When my son climbed up the bar, he tried to climb but he couldn't.

When my daughter rode a swing, he tried to ride but he couldn't.

His father who had his business bag sat down on the bench a little far from him and started his work and he hardly looked at his son.

I worried whether the boy would imitate my children and try to do dangerous action for him.

I told my children,

"Pay attention to him! If you do something dangerous, he will imitate you. So be careful!"


After a while, my son was riding a swing.

Suddenly the boy tried to go across the swing and he was about to bump into my son.

My son stopped the swing in a rush.

"Saved by the bell. It was dangerous!"

He imitated my son and smiled.

I was really relieved.


After that, the boy had been following us.

Since his father came to his son, I asked him,

"So will he enter the kindergarden or nursery school in next April?"

It was interesting to look at them.

My daughter who is still young for me was like an elder sister of him.

If they had a younger brother, they would be like that.

It was very interesting happening for me. 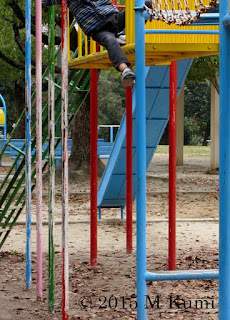