My children and I took a bath together last night.

Since we took a bath separately to prevent catching the flu from my son during he had the flu, I felt happy because my son almost recovered the flu and we could take a comfortable bath together.

My 6-year-old daughter and I sang "Let it Go" together.

While we were singing, my 7-year-old son wrote some Kanji on the mirror which was fogged with the steam.

But since I was singing, I only glanced at it.

After that, my 5-year-old daugher also wrote some Kanji on the mirror and said:

Suddenly, my son started speaking ill of his sister.

"What a terrible handwriting! This kanji is wrong!"

"Stop it. If you were said like that, you would surely get angry."

He got mad and started crying.

"I hate her! She is really annoying!  I don't want to see her any more! I will not talk with her forever!"

"Why on earth are you upset? Is it because I didn't look at your Kanji?"

"No! I wanted to learn how to write Kanji!"

"What are you saying? I have never taught your sister how to write Kanji!"

What he said didn't make sence.

Since he was about to hit her, I took my daughter to outside the bath.

My daughter didn't get angry with him.

"Why don't you get angry with him though he said what you hate?

He told that he hates you and he didn't want to see your face! "

"Because I am kind! I like him. I don't get angry with him."

She smiled at me.

My son abused her in the bath while my daughter and I were talking.

"What a kind girl you are!

Your son is under a big stress now, so you don't need to listen to what he is saying.

You know, he is usually a kind brother to you!

Can you go to the living room ahead?

You should stay away from him now."

She went to the living room.

After a while, my son came out of the bath while being angry.

"I understand your feeling. Maybe you envy your sister, don't you?"

She is easy-going, carefree, and doesn't get angry very often.

I want to be calm like her, but I can't because it is my character.

If I were your sister, I would surely get angry with you.

I mean, your character is really similar to mine.

I am sorry, the reason why you are in bad mood easily when you are not feeling well is because your character is really similar to mine!

If I were you, I would be in bad mood like you because I would want to be like her but I couldn't.

That's why she makes you irritated."

I hugged him and said:

"I love you even if you get mad.

You are my dearest son even if you are annoyed.

But don't hit her anymore, she has no offense.

She also likes you."

He nodded and went to the living room.

After a while, I could hear that they were playing togeter happily from the living room.

I have given priority to my son so far.

Because he is an elder brother.

But the difference in their ages is only a year and five months.

He has been feeling a pressure from her since he was a little boy.

That's why he never wants to lose her.

I need to give him a pride as an elder brother so that he will not become servile and he will be able to be kind to his sister.

Furthermore, I believe that it is a parent's duty to give a confidence and fulfillment which they are really loved to our children.

Because it is a biggist gift that I recieved from my parents. 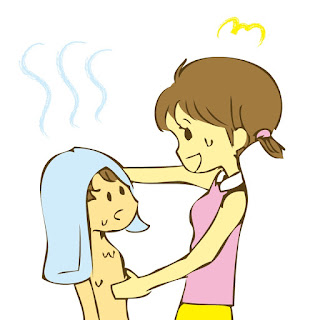