His challenge to badminton

It was a beautiful day yesterday.

My family went to the park to play badminton.

There was a reason why I wanted to play it.

When I pick my 6-year-old son up to the children's house after I finish working, my son is usually reading comincs though another children are playing dodgeball, badminton, and so on.

I know he prefers reading comics than playing such kinds of sports.

But as for badminton,  I also find it's not that he doesn't like playing it but he can't play it because he has never tried it yet.

I thought that he may feel he wants to play badminton with friends if he becomes able to play it.

After we played with playground equipments, we started playing badminton.

He couldn't hit a shuttle well at first.

It was funny that he didn't want my husband and I to teach him how to hit it.

He wanted to find the best way to hit it by himself.

His form was quite strange, but he tried many times to find his best way.

It was also funny that if he couldn't hit the shuttle well, he blameed us.

We admitted with a laugh though it was my son's fault.

We played it more than one hour.

Finally he was able to play it better than at first though he is not good enough.

The biggest improvement was what he could enjoy playing badminton.


Even more surprisingly, my 5-year-old daughter also wanted to play badminton, she practised it a lot with me and she could hit a shuttle well!

I thought it was still early for her, but she tried it eagerly.

Since she has an honest character, she was always open to my advice.

It is interesting that their way to learn something was completely different though they are siblings. 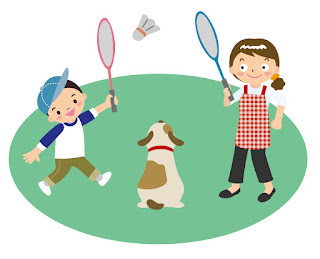